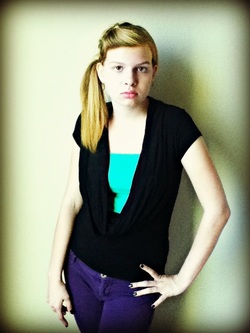 Ever since the fourth grade, I have wanted to become a singer. Even before then, my life had consisted of singing and writing, and during my fourth grade year I started to play an instrument in the school orchestra: the viola. I was inspired to sing ever since I heard my first song in the first grade: Losing Grip by Avril Lavigne. However, in the fifth grade, that was when I joined my first school choir. That was when I found out singing was harder than one might think. In the sixth grade, I had taken a semester off from choir then took the class again in the second semester. During three semesters of choir, I had tried out for many solos and never got them. It wasn't until my fourth semester of choir, in the eighth grade, when I had gained her first solo: singing Merry Christmas, Darling by the Carpenters at the choir Christmas concert. Earlier that semester, I had tried out for a scholarship for voice lessens, singing Don't Stop Believing by Journey and Heartbreaker by Pat Benatar. I had won a hundred-dollar scholarship in the Honorable Mention category. During the second semester, I had tried out for the school talent show singing a duet with my friend Olivia Kuziel, who is also a band member in Surreal Disorder. I had made it and sang Listen To Your Heart by D.H.T.. When the spring choir concert came up, I had tried out for a solo singing Be Bree, a song in which the lyrics I wrote myself (I am currently making the music for it). I had gotten a solo (one line long) in the song Fame, the newer version, in response to that audition. As the eighth grade came to an end, I found out that, since I was going to do the school IB program in high school, I couldn't participate in my school choir during my freshman year. Instead of not doing choir at all, I tried out for the Phoenix Children's Chorus and made it in the newest high school non-traveling choir: the Bravo choir. That is when I tried out for a solo in the Bravo Choir and didn't make it. During my sophmore year, I tried out and made it into my school's honors choir, of which we earned a Superior ranking at Regionals in 2012. During my seventh grade year, I was a part of a previous alternative rock band known as First Bad Habit, where I sang and played the viola and where my band name was Stella Isabella; however, that band no longer exists. Now I sings and plays the viola in the alternative rock band known as Surreal Disorder.

I enjoy singing, writing, acting, and playing the viola. I am a published author (as of July 27, 2012) under the name of Nicole Lambert (look me up on Smashwords!), and I guess you can say I can rap somewhat. Anyway, that is probably more than enough for now, so...au revoir!